Cook With Me: Blanquette de Veau for Jonell Galloway's The Rambling Epicure

Cook With Me: Blanquette de Veau for Jonell Galloway's The Rambling Epicure

Cook With Me: Blanquette de Veau for Jonell Galloway's The Rambling Epicure
Posted:
November 4, 2015
Simple Ingredients and Time Are All You Need to Make a Superb Blanquette de Veau
I jumped up to test this recipe for Jonell Galloway, who is a freelance writer and editor who specializes in French cuisine. Over at The Rambling Epicure she is writing a book called, The French and What They Eat. Details of the project are being fine-tuned. So stay-tuned.
Merci, Jonell, for offering me this opportunity to be a petite part of your book development! I'd love to help again, if you need more testers!
And since we're knee deep in talking about the thing we love most; cooking, France and her famous food, if you have a Teen interested in cuisine and in going to France, the Mother Lode and Birthplace of Cuisine, please sit down and take a look at our Figs, Foie Gras and Falconry Program offered this summer in Southwest France, Gascony.
But now back to Blanquette, and to carrots in particular.

Here is the line-up of our star-studded cast for the White Veal Stew with Apples, Carrots, and Onions. Please find the recipe below, and I hope you will try it, and see what you think! 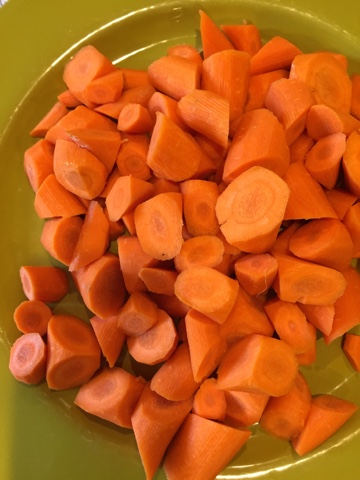 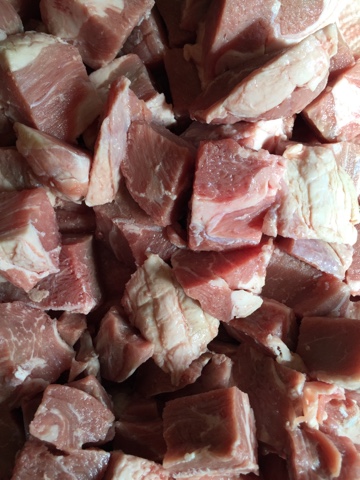 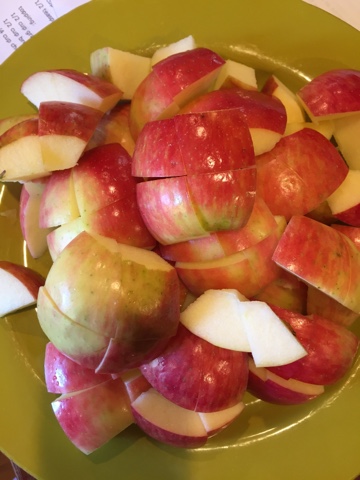 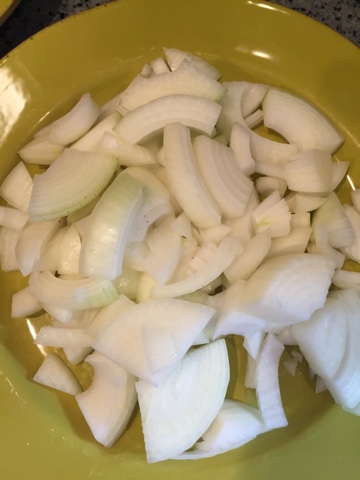 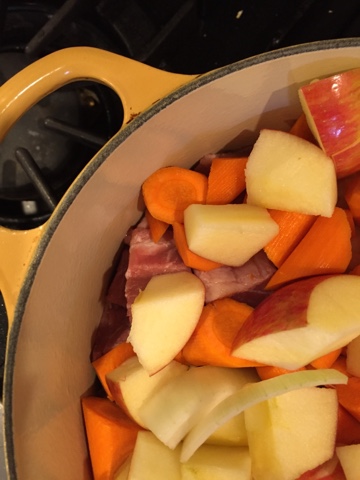 Veal, Apples, Onions, and Carrots in my Le Creuset pot. Salt and Pepper are the only seasonings, but just perfect!
Jonell asked that these questions be answered.
Thank you!
Chartres-style Blanquette de Veau Recipe / Apple, onion, carrot and veal stew in apple juice and white sauce recipe

This dish hails from Normandy, where cream, butter, apples and calves are abundant. Chartres is not officially in Normandy, but its cuisine is similar.

1 kilogram or 2 pounds veal shoulder, cut into 2″ x 2″ pieces
(I used 10 pounds as I was cooking for a crowd of well, 6 hungry feasters, on Halloween, and I wanted leftovers.)
12 pearl onions, or the white of 12 small spring onions, peeled and whole (I used two large onions chopped)
1 apple, chopped (I figured  was multiplying everything by 5, so I used 5 apples)
4 carrots, cut into large chunks crosswise (I had large carrots so I used 12)
Apple juice (I used 4 cups apple cider)
Veal or chicken broth (chicken broth)
6 small new potatoes in jacket ( I used about 15 "French fingerling", sliced in half)
4-5 tablespoons flour (10 tablespoons)
2-3 tablespoons butter (6 tablespoons)
1/2 liter or 1 quart milk (1 quart)
Italian or flat parsley, chopped (I used fresh tarragon.)
Salt
Pepper
Dutch oven or similar large pan
Note: This is often served with rice. If you prefer rice, leave out the potatoes. Small turnips can also be added at the beginning, as well as other vegetables, according to taste.
My guests absolutely loved it! And to be truthful, I must admit that some had four servings. I had enough leftover from the dinner for four generous servings the next day.
Merci, Jonell, for offering me this opportunity to be a petite part of your book development! I'd love to help again, if you need more testers!