Cook With Me: Let It Be Peeps, Charleston, and Vietnamese

Cook With Me: Let It Be Peeps, Charleston, and Vietnamese

Cook With Me: Let It Be Peeps, Charleston, and Vietnamese
Posted:
March 31, 2013


With all this talk of Peeps I can't help but take this little jaunt down Memory Lane with some VIP Peeps.
It involves the sticky business of marshmallows, Market Street Books and Maps, Charleston, and Vietnam. It's not easy to combine these ingredients successfully, so allow me to explain as best I can.
I wrote the "Let it Be Peeps" Poem commemorating Peeps in 2007 for a contest at  Market Street Books and Maps in Southern Village.
First  I must say that the title of the poem was a tribute to Trevor Dolan who was obsessed with the Beatles song, Let it Be. A few weeks before the Peeps Festival at MSB & M C'est si Bon! had taken a road trip to take part in the Children's Village at the Charleston Food and Wine Festival with Trevor and Chandler Knott, another intern, and Renee Burger (my assistant at the time) In addition to inviting folks to make a Summer Roll of their very own in the Children's Village we met Nathalie Dupree and Tyler Florence - getting a glimpse of the Food World on the Adult Side of the festival.
Now it was no secret that Renee did not share the same affection for that Beatles' song  - and so it was a real moment, I guess you could say,  when as we walked into a restaurant on Isle of Palms for breakfast, Let It Be was playing loud and clear.
Chandler Knott, Renee Ramage Burger, and Trevor Dolan

Vietnamese Summer Roll Ingredients
Chandler Knott and Trevor Dolan Getting Ready To Roll
Dorette Snover, Chandler Knott, and Trevor Dolan
But leap a few weeks forward from Charleston and we're back to Market Street Books and Maps on Peep Day ~ in addition to the Poem Contest there was a Cooking Contest where folks brought in their most audacious and delicious Peeps Dishes. Along with Marilyn, the manger of Weaver Street Market in Southern Village, Sheila Neal of Neal's Deli in Carrboro and Sheri Castle, author of The New Southern Garden Cookbook, we dipped out forks into the various dishes to judge and taste. 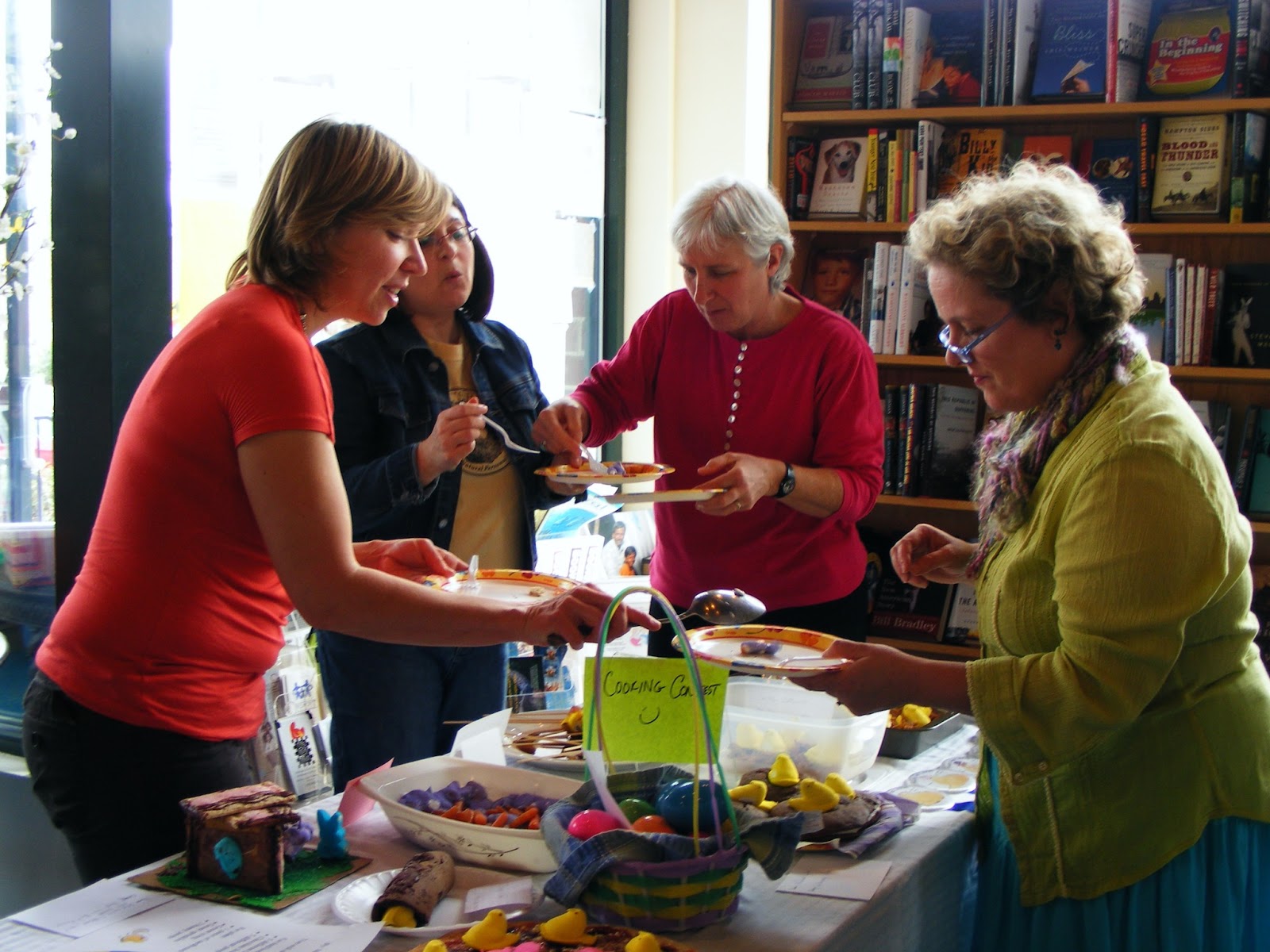 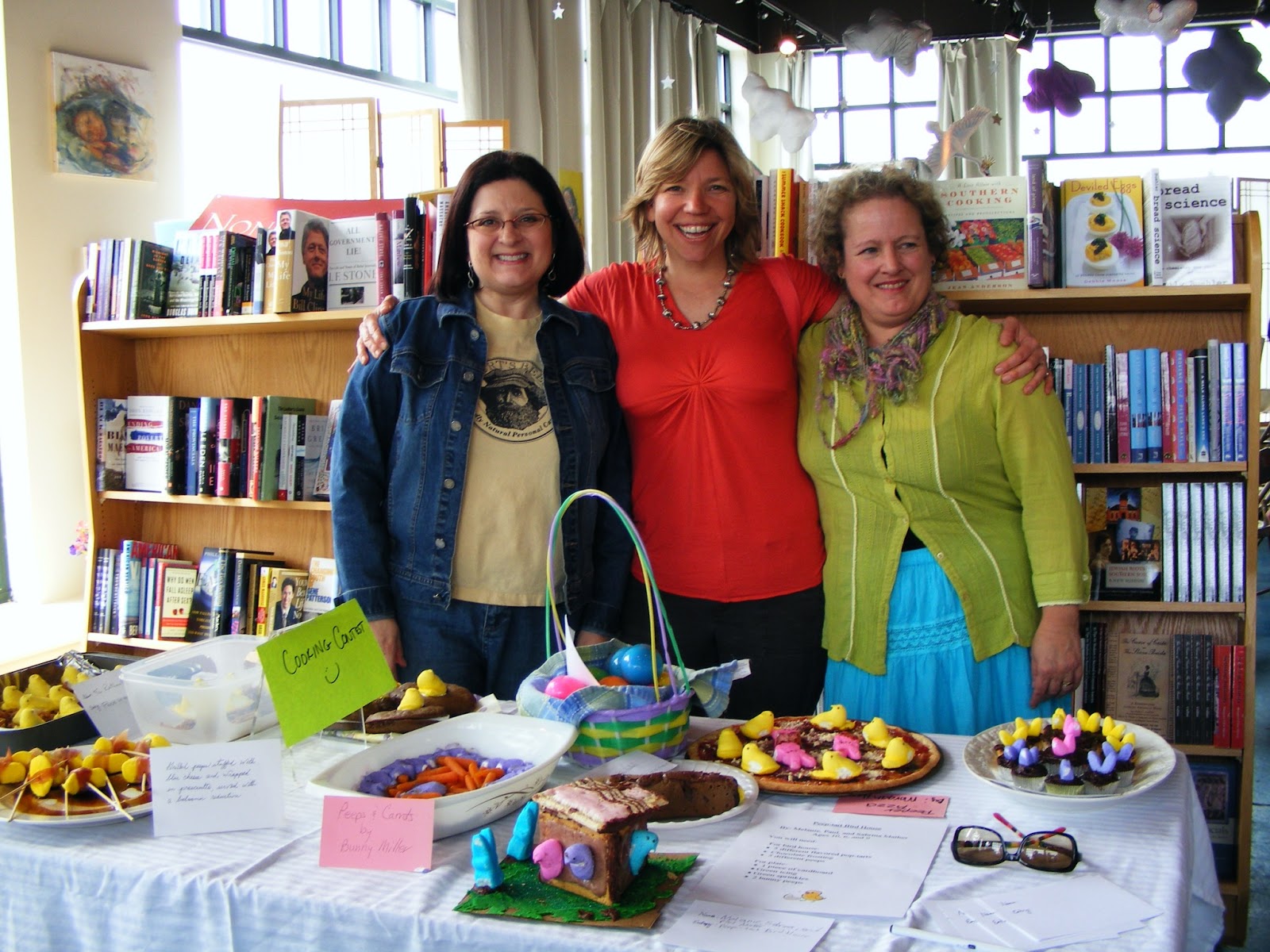 Sheri Castle, Sheila Neil, and Dorette Snover
After all that there also was a demo on making homemade marshmallows with assistant Cary Simpson  who worked  with Trevor occasionally at the shop and also with him as an intern at C'est si Bon! in those years. 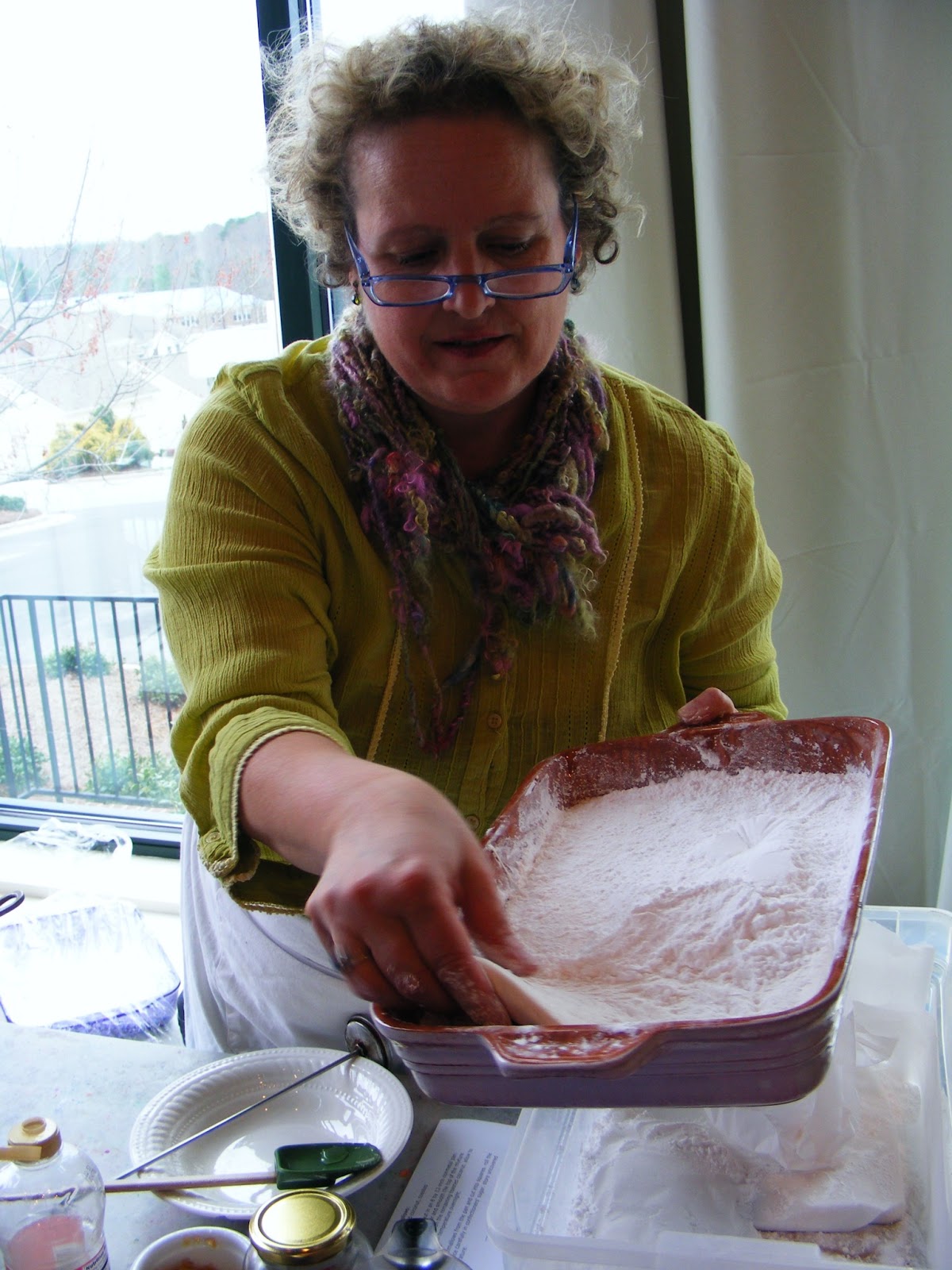 Gently Lifting Out the Marshmallow.. 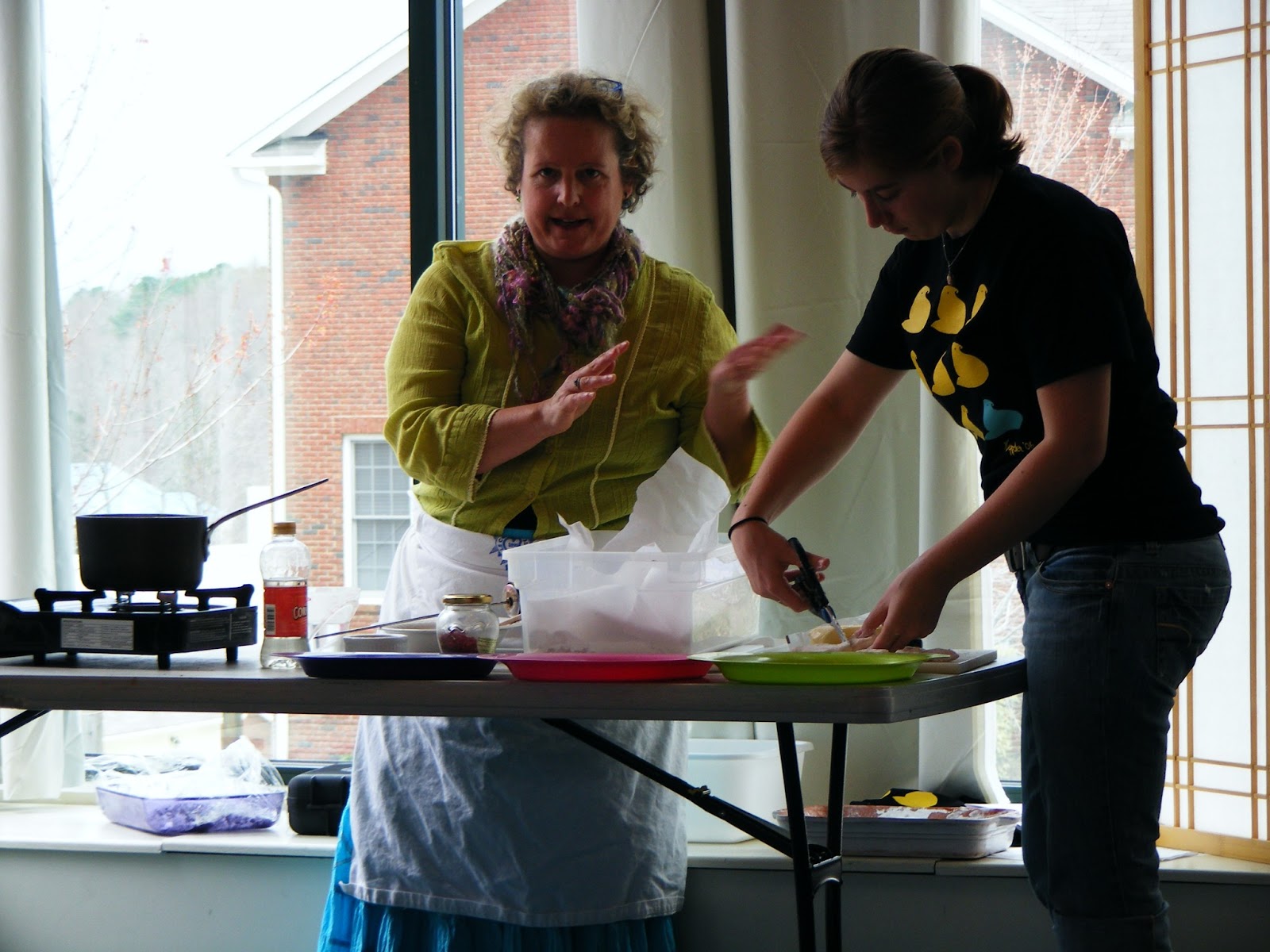 Cary Simpson is an excellent Assistant!
Let It Be Peeps – Dedicated to the Crew at C’est si Bon!

The First Peeps Ever Served
Were Roasted with Sage
Stuffed Into Swans
In the Medieval Age
Since then, Peeps have a following
Their path is Legion
Specialties of Peeps
Depend on their Region
Organic peeps - far as the eye can see
Slow Peeps with Depth
From
Wolfgang Puck Peeps from the
Charlie Trotter serves Roasted Quail Peeps - with Toasted Quinoa
.
Peeps studded with Pepper
Awashed with Chipotle
Then quickly Poached
And Stuffed in a Chayote
Tahini’ed and Gyroed,
Stuffed in a Peepsa
Flanked by Ricotta
From the Milk of a Sheepsa.
Low Fat, low Carb
Peeps Smoked over Wood.
Why don’t Farmers Raise Peeps?
They certainly Should.
Meatball Peeps,
All Piled in a Heap
Goodness said the Peep-Chef
How can I Sleep?
Dried Peeps and Aged Ones,
Fresh never Frozen
Artisanal Peeps, Local Ones
Baked by the Dozen
Peep Latte’s and Latke’s
Lamb Peeps of Miss Bo
Flaxen Seed Peeps
Make it easy to Go
Peep Butter
Peep Fudge
Peep Artichoke Salad
Peeps however served,
Are, well ~ they are Valid.
Tenderloin Peeps that never are raw
Peeps pulled from the ground are easy to gnaw.
Sushi Peeps, if you can listen,
Would much rather Be Food
Than Sea Food
That glistens.
Onioned and livered Peeps drive you to drink
Peep Sammies with tomatoes, eaten over the sink.
Multivitamin Peeps
with Gingko Bilboa
Polynesian Peeps
From the
Peeps on my Fish
Peeps on My Toast
Peeps of Falafel
From the .
Poi Peeps and Goil Peeps
Grilled up for the Crowd
Stuffed Burrito’s with Peeps
Are Exceedingly Loud.
Peepy Paneer
Very Spicy and Fried
Pared Parsnip Peeps Appeal
Never Has Died
High Fiber Peeps,
Tough to Chew
Peep Roast
And Pineapple Pepperoni Peepsa
Peeps
Make quite the Stewpsa
Vegetarian Peeps
Made of Tofurky
Blazing Peeps Ride the Range
Eating Leathered Peep Jerky
Homemade Peeps
Pink, Yellow and Green
Peeps of Huge Portions
With a Caramel Sheen
Roquefort Peeps,
Blue and Quite Salty
Genetically Modified Peeps
With Ears that are Faulty
Said the She-Chef
Peeps are my business
While she pushed back her toque
To lock in Peeps’ juices, she never did poke.
Only One Thing is Better
Than Peeps of All Kinds
Is Peeps who Persist
And Have Open Minds.
homemade marshmallows from the c’est si bon! kitchen
cocoa cinnamon, coconut/mango, almond apricot, pepper/lime,
orange/anise, saffron/ginger
3 packages unflavored gelatin
½ cup water, or orange or lime juice or other flavored liquid
2 cups raw organic sugar
2/3 cup honey
1/2 cup water
1/4 teaspoon kosher salt
flavorings - we’ve used anise seeds, candied ginger, saffron, cocoa, crushed red pepper, and cinnamon

butter
confectioners' sugar, for dusting
combine the gelatin and 1/2 cup of cold water in the bowl of an electric mixer fitted with the whisk attachment and allow to sit while you make the syrup.

meanwhile, combine the sugar, honey, salt, and 1/2 cup water in a small saucepan and cook over medium heat until the sugar dissolves. raise the heat to high and cook until the syrup reaches 240 degrees f on a candy thermometer. remove from the heat.

with the mixer on low speed, slowly pour the sugar syrup into the dissolved gelatin. put the mixer on high speed and whip until the mixture is very thick, about 15 minutes. add the vanilla or other flavorings and mix thoroughly.
butter an 8 by 12-inch glass pan. dust liberally with confectioner’s sugar as you might a cake pan with flour. using a well-buttered spatula pour or scrape the marshmallow batter in the pan and smooth the top of the mixture with buttered hands. sprinkle on any remaining chopped toppings. allow to dry uncovered at room temperature overnight.

remove the marshmallows from the pan and cut into squares using a buttered scissors. coat each piece in confectioners' sugar.

store in a covered container at room temperature.