French Travel Tales: Foie Gras and Vin de Noix on Toussaint, All Saint's Day
Posted:
October 30, 2013
Here it is again. Almost. All Saint’s Day, November 1, or as its called in France, La Toussaint.
It's a perfect day to call forth another time. The first time I journeyed to France. A time when I only had words to describe Toussaint as a holiday that celebrated long lost souls, joining those who have died with those who are simply lost on this earth.
Would I meet long lost souls, a few ghastly ghosts, as did Ebenezer in the Christmas Carol?
And would they want to meet me? And why in France? Was I dressed appropriately?
And as I landed in on La Toussaint, All Saint's Day, my search began; my search for my coat, (it was freezing cold) for my tumbling luggage, for the Air France Bus, and for a way to thank a kind Frenchman named Serge, who ran with me carrying my bag, straight to my seat on the TGV in Gare de Lyon. He barely made it off the train. Once I collected myself the French passengers sounded comforting, like a song whose words I had  forgotten, but whose melody had already been etched on my bones.
The streets and people of Paris rushed away while I watched, looking and longing. I leaned forward in the direction we were leaving. I watched the City of Light disappear at dawn.
But the bumps were few as we left and descended, entering middle , the golden hills and vines soothed me with their dreamy impressions. And I rode into them,
gladly looking through the window glass, I folded my hands in my lap.
Everything would be perfect here. At last. Here, a few spirits would show where I belonged.
And so it was that at dusk on La Toussaint, I plunged into a driveway.
Even as I looked out of the passenger window, the stone house was lit in a soft mauve and smoky sky.
The Canal stretched out alongside and the dark blue water ribboned away,
much like a storybook trail with the wide grassy towpath following
and both meandered under the trees and disappeared in the distance much like Paris.
When I opened the door of the car,
the rich black Gascon soil underfoot echoed
with voices from the Hundred Year's War,
which, uh frankly, didn't seem all that far gone.
White ducks  glided past us,wing over wing,
and landed on the golden poplar leaves patterning the water's surface.
Inside the beautiful Gascon stonehouse, was of course, the kitchen.
On the rustic kitchen table sat a few bottles of vin de noix.
The kitchen table divided or did it maybe, join, the two worlds.
That of tall steaming pots on one side and the crackling fire on the other.
Rognon, the father of this family, sat at the head of the kitchen table.
Rognon was lively and charming, but not overbearing. I didn’t know.
Was he what a father should be?
Rognon was thoughtful and curious with a bit of a spark in his talk.
He began the evening gesturing towards the kitchen and the marvelous dinner to come with a story.
A story about his family making vin de noix every June 24.
A story about how the walnut wine rests and sleeps deeply, until pop!
It is uncorked on November 1, All Saint's Day.
He picked up such an ordinary looking bottle.
Sante! Rognon gathered the simple tumblers and poured forth, handed out the short stocky glasses
filled with the rich drops of his story, and okay, a wee bit of the vin de noix.

"On this day all the spirits of the past welcome you and visit the earth again."

To put it mildly, vin de noix,
each step in the dance with the spirits and with the walnuts, intrigued me.
I tilted the burnished liquid back, and the sweet and bitter edged elixir streamed down my throat.
Ummm. Looking into the fire, the flames danced. Steam enveloped the kitchen.
Was I no longer lost? Maybe.
But where exactly was I? And even more curiously, when exactly was I?
After a long day of travel and so many new visions, I was somewhat, let's say, reflective.
At that time I felt I had not only lost my family once, but twice! And even though later I learned, that in fact, they had been the ones who lost me, maybe I could rewrite my life with the help of a few French ghosts,
bien sur, and with a little vin de noix, and  I was never going to lose them again! Ever!
In France it was c'est normal to be expressed about food, and to be spirited, be in the moment.
In the moment then, the simplicity of gathering at their table, I felt accepted. Like family? In smelling their beautiful and classic Gascon au poulet a pot, I felt welcomed as family. Since I was without their language, a loose interpretation and intuition were paramount, and in their banter of French, I sensed an exchange about the day, the obscurity of life.
The world of chance and fortune. And garlic soup.
Next, Rognon casually rubbed a clove of garlic over thick slices of bread, looking up as he spoke, then toasted the bread with the great holes, sitting by the fire.
He spoke of tastes and extraordinary circumstance. I think.
Or maybe it was just that next, my parched soul rejoiced as he opened a jar of home-preserved foie gras.
He spread the silky gras on the oak-scented garlic-rubbed bread.
Then we drank a little more vin de noix, and sealed the night of Toussaint with a heavenly elixir.
The memory of those tastes and the night of vin de noix
called forth a delicate transformation of foie gras and fire. And walnuts.
A fragile intangible that escapes in flames in the same it is conceived.
In one little glass of vin de noix, I could, and still do, taste the joy and the poignancy of the day, of that day, stroke my throat to swallow, like the dear duck did,
and join my past turmoil with a more peaceful present. And c'est la vie.
A circle rejoined. And gratitude poured forth. And fourth! And fifth!
For that time halted, and for that day, to be found in the drunken poetry of walnuts.
Like the roots of an ancient walnut tree in a deeply plotted garden,
where in June,
the green walnuts are never afraid to begin again,
as they must,
another journey towards another Toussaint.
tourin d’ail avec romarin - garlic soup with leeks and rosemary
3 bulbs garlic, separated into cloves but left whole
2 leeks, white and green parts
½ cup of butter, olive oil or duck fat
1½ quarts of stock or water and wine
2 tablespoons flour
2 tablespoons verjuice
salt and fresh rosemary
heat the duck fat in a heavy pot over the fire (or on medium high heat) saute the garlic and the leeks at the same time till tender. stir in the flour – mind you it will look like a mess but don’t worry – when the flour has made a nice paste add in the stock, wine and/or water.
cook for as long as you like – but at least 30 minutes and no more than one hour or you’ll need to add more liquid. When ready to eat, pound the rosemary in the mortar and pestle and float on top of each serving. 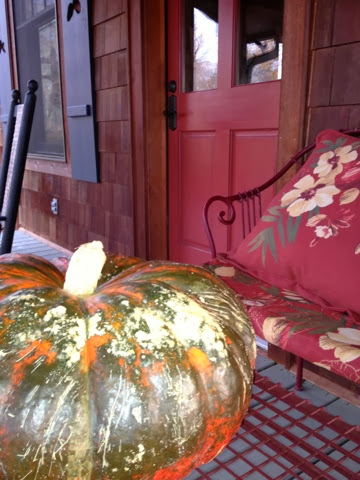 A Point of View Mountain Retreat with Diana Renfro, Authoress of Spanish Doors.