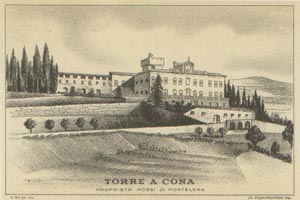 Nancy Drew and the Secret of the Tuscan Villa
It must have been 2005, I've kind of forgotten the exact date - but I know for sure I was playing hostess for C'est si Bon!'s first Tuscan Sun Tour, a culinary extravaganza in October’s Chianti country about 8 miles outside .
The estate of Torre Cona had all the imposing stature of the grand times. The past. The parties. The people. The legend and the history of the owner. Count Rossi of Montelera or as we know him - Mr. Rossi of Martini and Rossi.

There were paths for carriages and paths for the workers. But I knew the path we were on. Up to No Good! 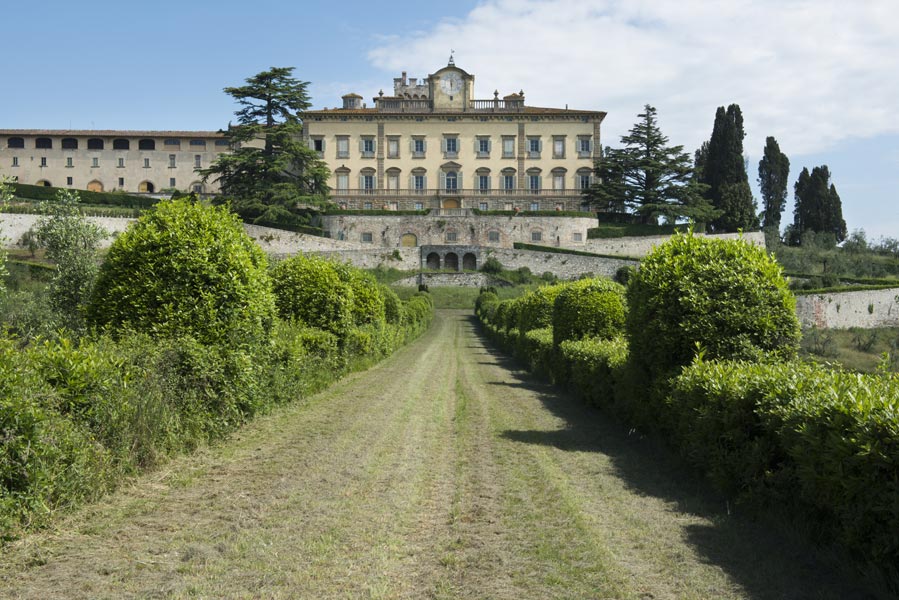 
We picked grapes in the afternoon. Followed by a tour of the public areas of the Villa. The porticos and the wine presses. 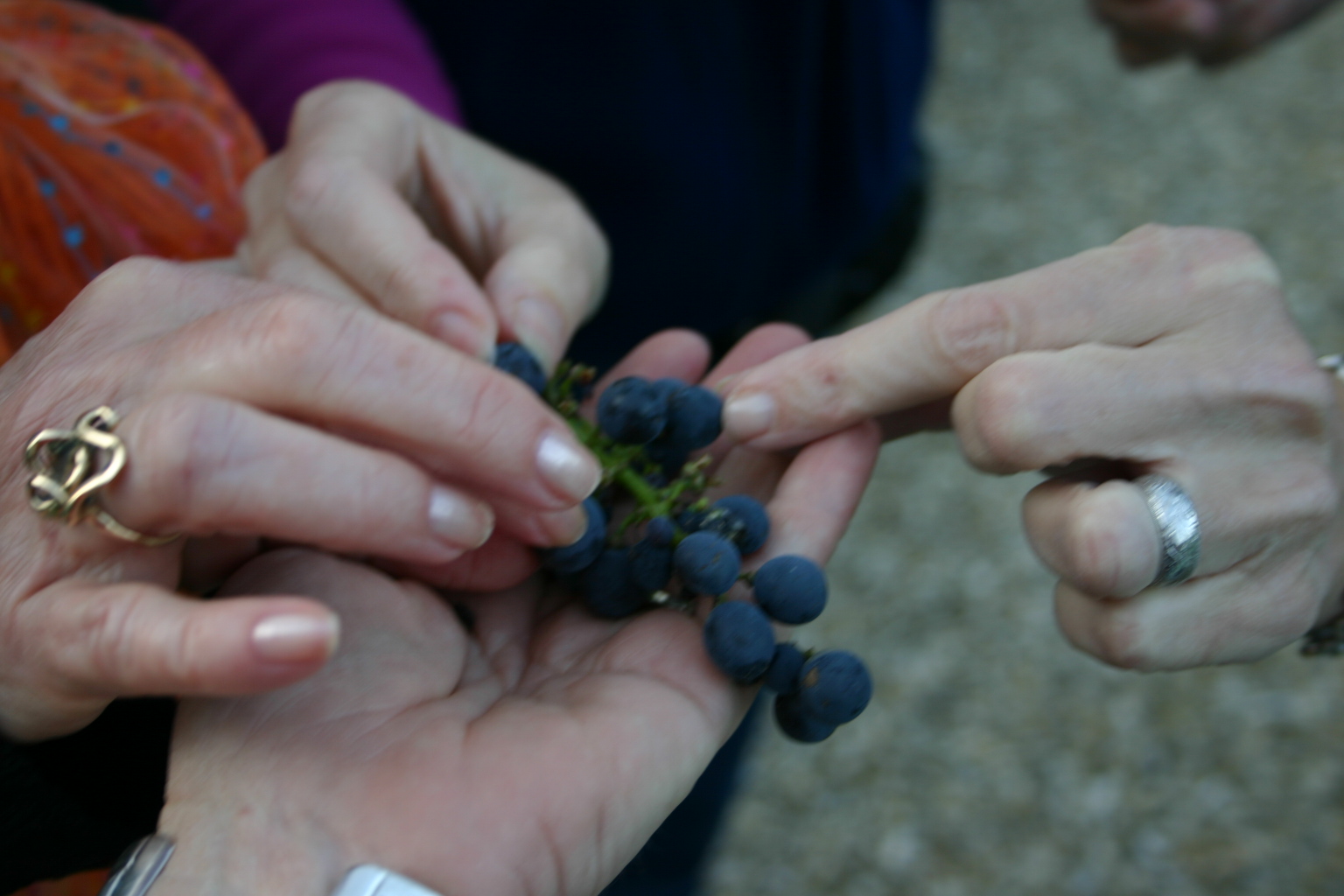 How beautiful this is. 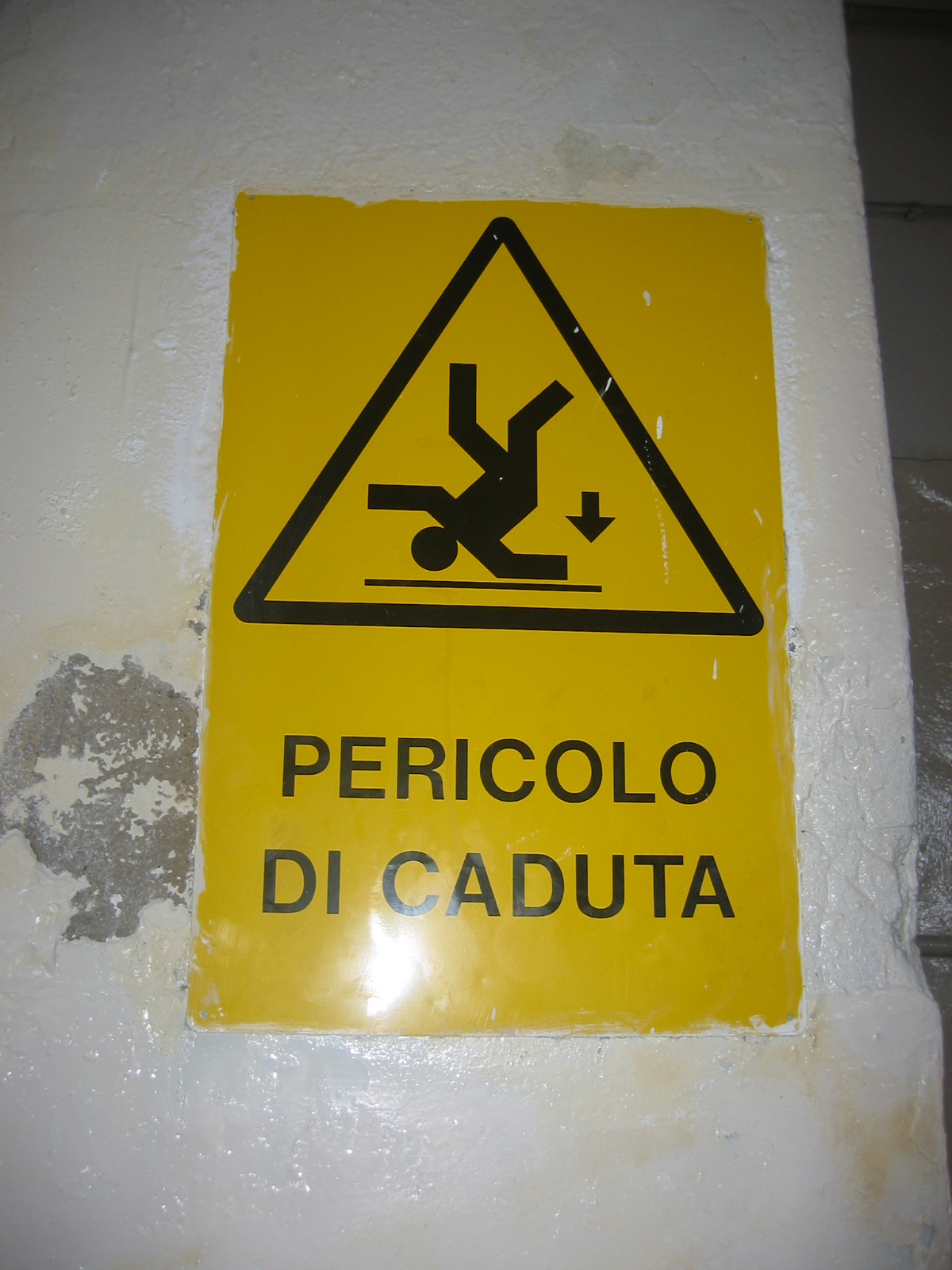 Oopsie.
Lisa, Brenda, Cathy and Constance - friends and tour participants, all - gathered and talked about the imposing villa. The towering presence of Grandeur. We wondered, what were its secrets? Could we see more of the inside? How many rooms did she say? Three Hundred and Sixty? There were only six of us.
It was a simple request. 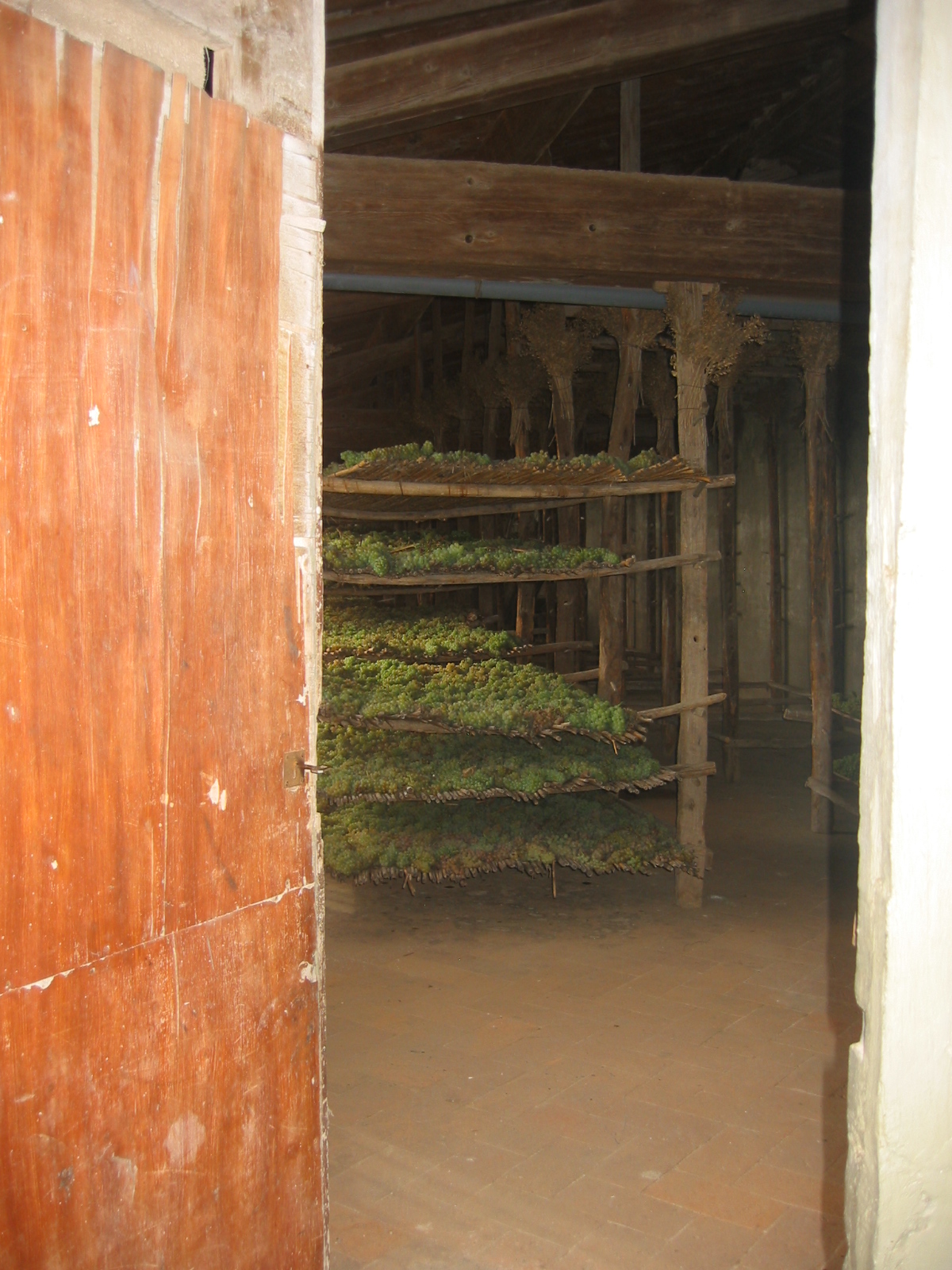 Grapes Drying For Vin Santo, The Wine of Saints
The cooking class with Paolo that night was Gnudi Ravioli and this was all we needed to rev up our imaginations. We couldn’t stop giggling and gesturing at the innuendos. Of course we remained fully composed and while taking a break from cooking, we looked up the hill. One light in the villa was on. Was that the wing where they had said the owner lived? Was his son home from for one night?

The answer came back. No, it wasn't allowed. It was too ...and then her voice trailed off.

Too what? We lost the answer in the translation. Why didn't I learn more Italian! 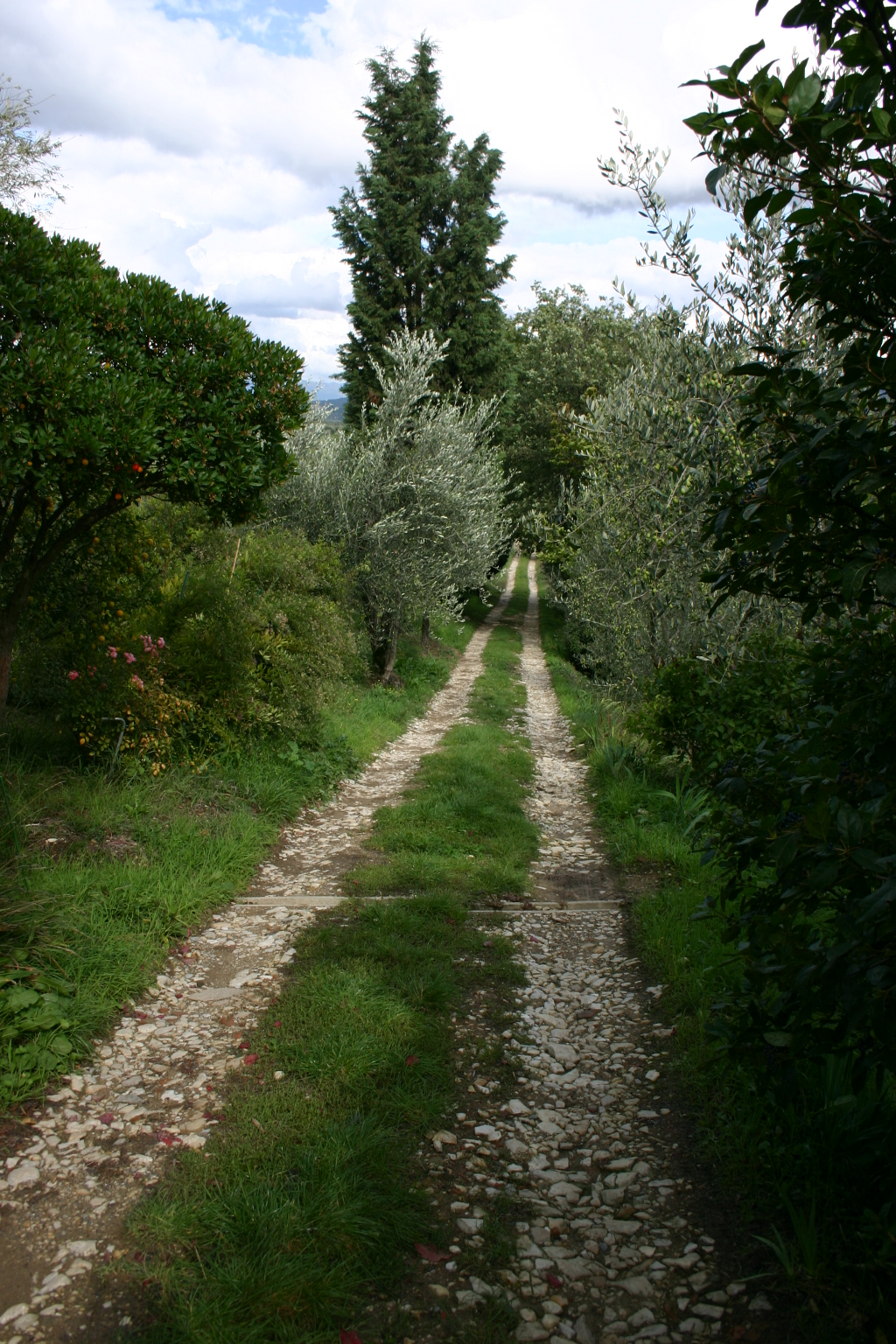 The Stony Path - looks fine now, but at night?

We could sneak up to the stony path to the garden from Casa Villa after dark.

It was quite the dilemma. 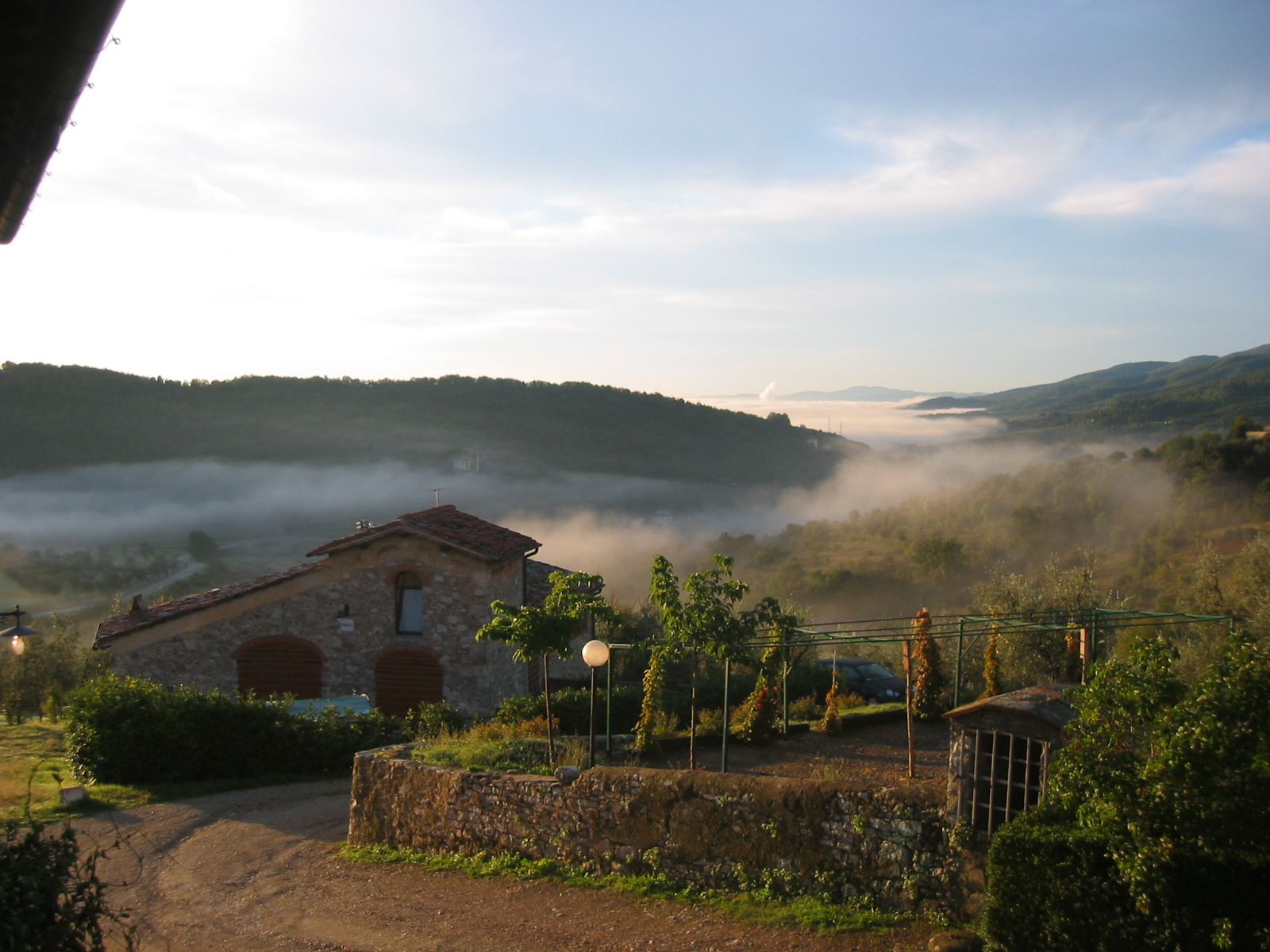 Could we worm our way inside from the garden, squashed tomatoes underfoot? The Sangiovese helped a little with the planning and a lot with the confidence. We could be quiet. Oh, sure we could. But look, it wasn’t our fault. It was forbidden. And the lure of not being allowed was too much to bear.
I was in charge of this culinary tour and so I said what I was supposed to say. Absolutely no. I fought with myself to be respectable. Don’t push too hard.

Oh, hell.
With just a drop of Vin Santo for bon chance, off we went into the dark night. 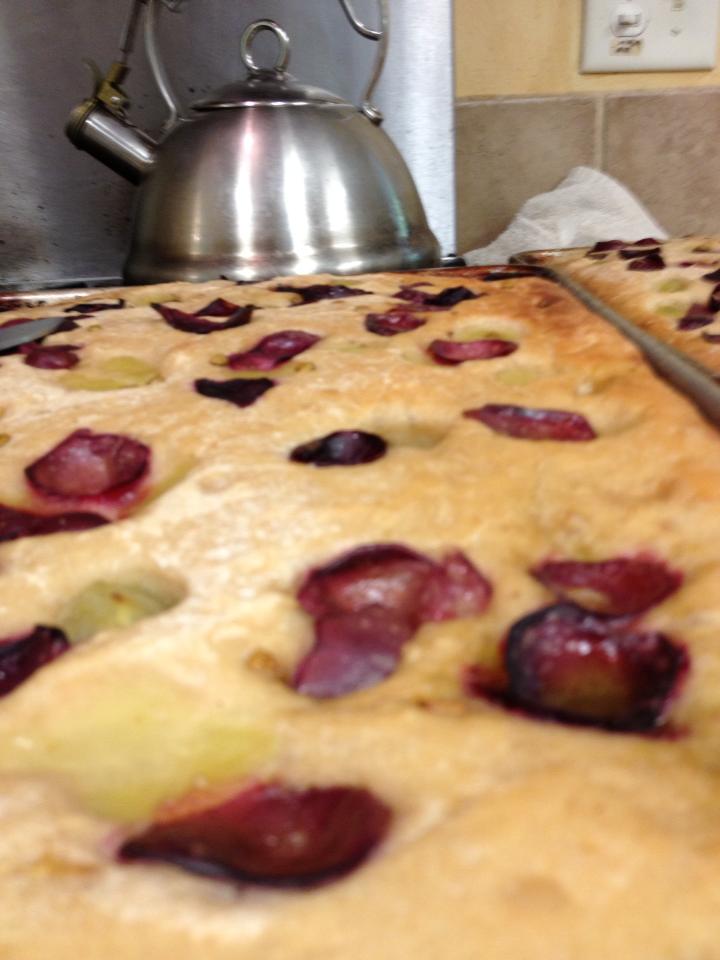 schiacciata con grappoli d’uva with muscadines
I recently made this again, but used what was local and available. Muscadines. Not Sangiovese grapes with seeds that I was dreaming about, but I plumb didn't have any. the skins pop off, leaving the flesh and seeds separate. not the same at all. you can make it without the extra fuss and the seeds, but if you do it is sweet, peppery, spicy, crunchy, and wet with the grapes’ warm juices. a legacy from the Etruscans, it is depicted in ancient friezes, being carried forth to the harvest tables. so harvest, and explore the unknown and carry forth, my little gnudi raviolis and peeps.

remove from the fridge an hour before you put the rest of the dough together.
in a small pan, warm the oil over a low flame and add the rosemary, fennel, anise, and black pepper, permitting the spices to perfume the oil for 10 minutes. remove from the flame and set aside.

return to the sponge in the bowl and add the remaining 4 cups of flour, the salt, ¼ cup of honey, the eggs, and all but 2 t. of the spiced oil with its seeds, incorporating the elements well.

turn the mass out onto a lightly floured board and knead for 5 minutes. place the dough in a lightly oiled bowl and permit the mass to rise for 30 minutes. deflate the dough and roll it, or flatten it with your hands, into a free-form circle or rectangle, and position it on a parchment-lined baking sheet.

squeeze the grapes and press them into the dough, drizzle them with the remaining 2 t. of spiced oil — seeds and all — dust them liberally with the sugar, and grind over generous amounts of black pepper. cover the bread with a clean kitchen towel and permit it to rise for 40 minutes.

preheat the oven to 400 degrees f. bake the schiacciata for 25 to 30 minutes, or until it is golden and swollen, the grape skins bursting. cool the bread on a rack for 5 minutes.

serve the bread very warm, warm, or tepid. wonderful with gorgonzola dribbled with honey and black pepper, and/or a glass of vin santo or other sweetish dessert wine.