Teen-Chef Alumni of C'est si Bon! Series: Nora!
Posted:
April 5, 2016
This is the beginning of our Teen-Chef Alumni Series where we catch up with Teens who have gone with us on various Culinary Travel Adventures, both in North Carolina and abroad in France and Italy, and learn where are they now?

Learn more about our current programs in Gascony this summer, 2017, Taste the Adventure. If you are a Teen Chef (all grown up now!) who has been with us, and want to get back in touch, please write me dorette at cestsibon.net.
Nora was in her teens, and with us for our first Teens in Provence, back in 2005, with our Co-leaders, Madeline and Erick Vedel at Ecole de la Cuisine Provencale.  Madeleine is up to marvelous foibles herself; "French-trained in cheese making and goat herding, developing farm projects in the US, making award-winning cheeses, collaborating with fantastic colleagues, and re-learning how to live in America & be American with my two (very French) teen-age sons."   Read her post about l'affinage in Nimes, France. 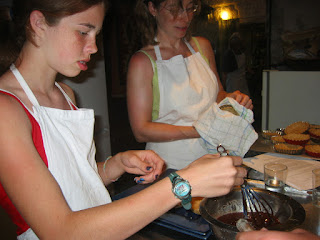 All of a sudden we're up to now, and it's been a such a pleasure to catch up with Nora.

"I've been quite busy doing lots of different things; leather working crafts, working on farms in the summer, and doing Viking Age Living History in my free time."

Did you say Viking?

"Viking age dishes are usually combinations of fish, lamb, barley or oats, tubers, and fresh herbs like cilantro and mint. They would roast meat by building a fire around a whole animal in a pit."
When she's not doing leather and farm working, she participates with Viking events in North America, the best ones being in Quebec.

For more info and inspiration visit Nora's site at www.noraevett.com.
Many viking folks she knows are aiming for trips to Viking Markets in Europe; in Denmark, Germany, and Poland.

"My favorite dish from Provence was definitely the stuffed zucchini, I still make it all the time (usually I stuff it with rice, meat, and maybe cheese). We also do cherry clafoutis quite often."
Nora, thank you for spending some time with us! We hope you'll keep us posted on your further adventures, and come visit us in NC if you can.
Stay tuned, who will be up next? Cary, Stephanie, Sarah, Claire, Becca, or ??
Here is the stuffed zucchini we did in Provence

As Nora says, we learned this dish from Madeleine and Erick Vedel in Arles. The traditional vegetables that we stuffed were tomatoes, bell peppers and zucchini/courgettes. However, you can also stuff onions or mushroom caps or eggplant. This is one of those dishes that can be a side dish of a big meal, or the main course, even a one-dish dinner that pleases well and covers all the bases.

Cut the tops of the tomatoes and put aside for later use. Remove the seeds and juice from the tomatoes, dumping them into the stuffing bowl. Cut the bell peppers in 2 lengthwise and remove and toss the seeds. Slice a millimeter or 3 off each of the bell peppers and chop finely to add to the stuffing. Cut the zucchini/courgettes in 2 lengthwise and core the center with a spoon, adding the center - chopped - to the stuffing. Place the vegetable halves in oven safe platters, open side up.

Take your stuffing bowl, now filled with the chopped bits of all the vegetables you¹re stuffing, and add the ground meat, the chopped garlic, the chopped parsley, the cooked rice, the soaked and strained bread, the salt and pepper. Mix well and then spoon into the vegetables, leaving the peppers for last as they consume the most stuffing.

Dribble the olive oil over the vegetables, pour a little water in the bottom of the platter(s) and place in the oven at 180c (375f) for an hour and 15 minutes.