Thanks for joining the continuing series on our Teen-Chef Alumni and discover Where Are They Now?
I invite you to catch up on Nora, Elijah, Maya, Jonathan, Cary,  and Grace
As well as learn more about my son, Erick, co-leader and instructor of our very talented Summer Taste Team!
Please meet another member of the C'est si Bon! Team of whom we are very fond, Jeremy Salamon!

If you are in NY you do not want to miss this!! Visit fond soon for the menus! You can follow him on Instagram @jeremycooks of @fondnyc

But if you do, you can visit Jeremy when he returns to teach kid-chefs this summer at C'est si Bon! We are thrilled to have him return, and to again spend a quiet moment at the cherry kitchen table. 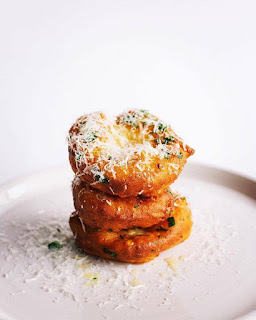 Jeremys Langos, Fried Potato Bread with Garlic and Honey
(yield 20 small fritters)
Ingredients
-  490 grams Yukon - Gold Potato, peeled / cubed
-  1 Tablespoon instant yeast
-   2 teaspoon sugar
-   1 cup warm milk
-   3 Tablespoon extra virgin olive oil
-   1.5 teaspoon salt
-   2 cups 00 flour
-   1 quart canola oil, for frying
-   Salt, for seasoning
Method
Submerge the potato in a small pot of cold water. Bring to a boil and cook until potato is fork tender (about 10 minutes). Drain the water and while still hot puree ( or mash ) the potato until smooth. Let cool.
In the meantime, stir the yeast and sugar into the warmed milk. Let the yeast bubble and foam. Preferably in a food processor (or by hand), stream the milk mixture, olive oil, and salt into the cooled potato. Pulse the flour in 1 cup at a time until the mixture has formed a semi-sticky ball. Let rest in a large oiled bowl in a warm area of the kitchen (about 1-2 hours).
In a medium heavy bottomed pot, begin to heat the oil until it registers 350F on a candy/oil thermometer.
By now the dough will be big and fluffy. Punch it down and with oiled hands scoop out on to a floured surface. Knead the dough ever so gently until it comes together once more. To form the Langos, pinch a tablespoon sized ball from the dough. Working from the center pinch with your finger tips to the edges. You want a thin tiny saucer (there’s no right or wrong here).
Working in batches, carefully fry each piece until golden brown. 1-2 minutes per side. Drain on a  paper bag or towel and immediately  season with salt.
Langos is typically brushed with garlic oil and topped with grated cheese. Be creative! Try tossing in flavored sugar and serving alongside jam!
Blog Tags:
Teen-Chefs
Recipe Tags:
Doughnuts
Side Dishes. Breads