(Go Here for Part One)

Last week we returned to the always favorite "dinner special" of food films. We tried to define what is a Food Film, with a couple of capitols thrown in for good measure, and what we decided was that any film that stirs your appetite is indeed, a Food Film.

(whether it deserves ALL CAPS is purely a matter of taste and what you can, er, stomach.)
Here then, what I came up with is a number of categories. From feature films, and a bevy of film folks – just as interesting as the films themselves – who direct and appear in them.
Here's my Top List of Food Films with Flair and Cunning, Straddling Art.
The Story of Boys and Girls is a Feature film. This is the bad boy cousin of Big Night. A 20 course Italian Wedding Feast is being made and where there’s pasta, there's always drama!

Here's a review that was in the Washington Post.


The Exterminating Angel, another feature film and an art film, is the brain child of South American director, Luis Buñuel. After a sumptuous dinner party the guests find that they are unable to depart. Not physically, but psychologically.

Check out the IMDB listing and a very cool photo (which I tried to post here, but alas the photo must be unable to depart the dining room too)
Ah me, and who could forget the lusty literature category of Feature Films?

What about the rowdy Tom Jones, from 1963? heavens, I don't mean the "It's Not Unusual" singing Tom Jones - but, the other one, the Tom Jones from The History of Tom Jones, a Foundling, an 18 book novel by Henry Fielding, who was also a playwright, first published in 1749. Now this Tom Jones was a rambunctious and conflicted lad, killing partridges and getting into all kinds of trouble.

Here's a frisky Joyce Redman - who played opposite Tom - in the notorious scene of eating roast chicken. This is a standard, be sure to watch! 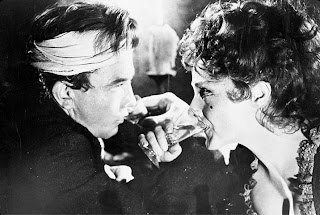 Take a moment to catch your breath.

And that, dear friends is where I will leave you. Surely I haven't exhausted the list? As you ponder and peruse, what are your favorite food films?


Leave a comment on the blog if you'd like to join a Film and Food Afficianadoes Meet-Up Group and watch some of these!
Next time, for Part Trois, we'll get into the category of Documentaries and Shorts for Film festivals. There's some infinitely yummy and sexy possibilities there