Write With Me: Carpe Diem at the Fulton Fish Market

Write With Me: Carpe Diem at the Fulton Fish Market

Write With Me: Carpe Diem at the Fulton Fish Market
Posted:
May 28, 2014
This excerpt from Mother's Five. A Season of Sauces. During this period, I was the food editor of the Chapel Hill News, and joined a conference in NYC of the AFJ, Association of Food Journalists. 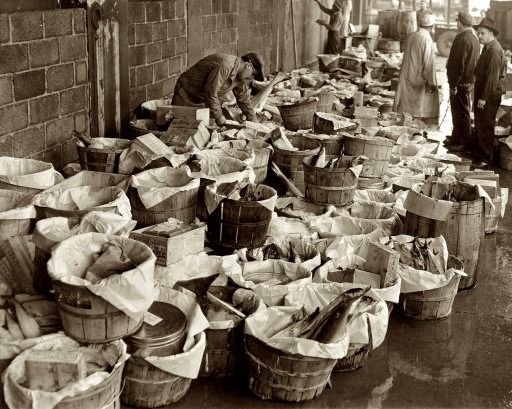 Teddy's at Fulton Fish Market in 1944. A Tisket and a Basket of  Carp.
“It is 2:30 isn’t it ?” came the questions, from uncoffee’d souls, not sure why now they had signed on for this early morning, Fulton Fish Market, tour.  Though the light inside the Westbury Hotel was the same as ever it appeared to be less bright than at 9am, coffee again, notwithstanding.
“Where is the goddamm coffee?” someone asked. Oh, that was me.  Walking amounted to mere attempts at shuffling. Blood circulated sleepily through veins, which only hours before, had rollicked alongside Rioja wines and tapas at the Metropolitan in a toast to the new Goya exhibit.
We begin in a double decker bus, cruising the back streets of New York under the guidance of an almost full moon.
At market we saw a doctorfish, mentioned by Shirley King in her book, Fish Basics. Cries of “watch out for trucks and men with hooks.”  Good advice no matter what the hour.
“Nothing comes here by boat anymore.” Open 5 days from 3AM to 9AM.  Greatest variety of seafood on the Atlantic Seaboard.  Southern fish comes in Sunday and Wednesday.  Two buildings run from Fulton Street to Pecks Slip South.  Most fish sold whole.  Outa town people come on Monday, Thursday, and Friday. Oh, zee little crabs, king mackerel, Venezuela parrot fish, croakers, squid, spanish mackeral, weakfish, John Dory, and spots.  All fish in New York comes through here at some point.  Sea robin, carp, tuna, shark, sword, fluke, flounder, bluefish, red snapper, amberjack, porgies, marlin, yellowfish and the movement to not buy billfish.  Who needs a fish with a bill? Yikes!  Tilefish, deepwater local fish not floor specialist. Monkfish, shark of unknown origin, arctic char, skate wings, triggerfish, red mullet (rouge).

“Everything that moves in the water, we sell.” Fish from Portugal, just for the halibut. Atlantic Wolf Fish, charmer with teeth. We wave goodbye to fresh smelt, and pass Sloppy Lowie’s, established in 1930 on our way to Amy’s Breads.
Little did I know the luminaries I was walking with.