Write With Me: Pero Tafur and the Sea-Faring Focaccia.

Write With Me: Pero Tafur and the Sea-Faring Focaccia.

Write With Me: Pero Tafur and the Sea-Faring Focaccia.
Posted:
January 4, 2015

Bonjour Mes Amis of the Kitchen and the Pen ~~~

Of course there will be a fire involved. Just in case you were worried that this will be a flat story about a, flat bread, a focaccia.

Now that the holidays have passed..I have set my sights on pulling together various threads of the Psomi manuscript.

This morning as I was reading about carrier pigeons, who should stumble in but Pero Tafur, who claims to be a Spanish traveler born in 1410, about then, and in Cordoba, or about there, somewhere. His stories exbound on sea-going adventures in the Mediterranean, taken vessels, miserable conditions, and the occassional French squire falling off a mountain.

At the time he wrote his travelogue narratives there was no such thing as printing. If you want to go along for the rather extraordinary ride, put on your rain slicker and read the digitized version 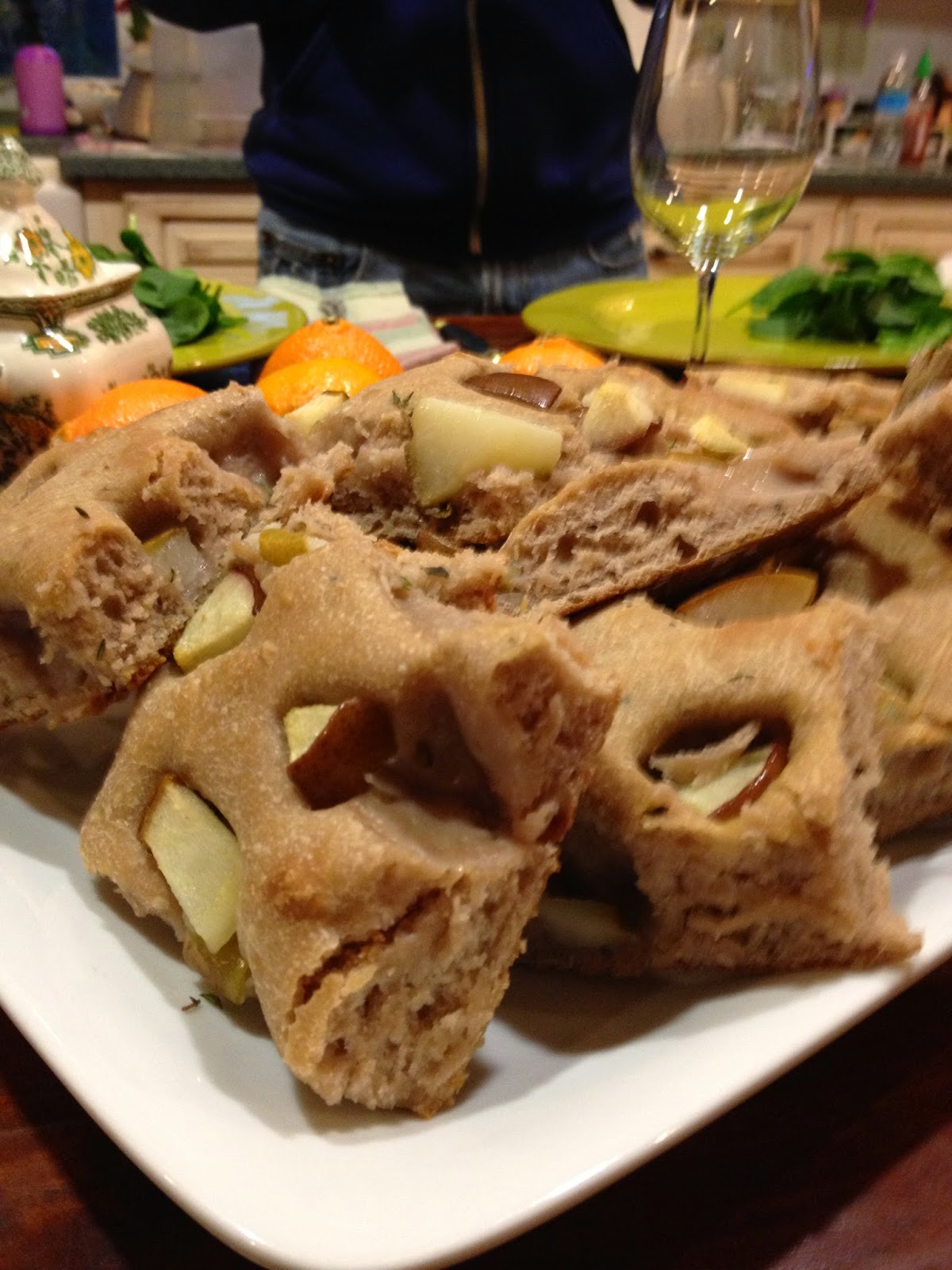 Chestnut focaccia with poire, lavender and thyme
You may be surprised at how well the pear blends with thyme and lavender atop this chewy earthy bread.
The starter:
3 cups all-purpose flour
1 package or 2 t. Dry yeast
2 ½ cups lukewarm water
Start the starter:
One full day, that is 24 hours before you’d like to eat/serve your focaccia make the starter.
Put the flour in a large glass or crockery bowl. And make a well in the center. Add the yeast and water to the well ad gradually stir them to mix them. Gradually incorporate the flour until well combined. Beat until smooth, using a fork is fine. Cover with a towel in a warm draft free place for 24 hours. In order to get a starter going you must feed it. Every 7 days discard 1 cup or 8 ounces of your starter, and replace it with this. 3/4 cup plus 2 tablespoons mixed flour and 1/2 cup water. If a clear liquid forms on top, just stir it in, but if it turns pink, the starter has spoiled. Throw it away.
Once your starter is established, plan to use it once a week or discard 1 cup and feed it 2 cups of flour and 1 cup water to keep it fresh and active.

For the final focaccia:
1 cup of starter
2 1/4 cups more water
2-4 cups chestnut flour
2-4 cups regular flour
For topping:
Olive oil
1 tablespoon sea salt or kosher salt
1 teaspoon fresh thyme, combined with 1/8 tsp lavender
3 chopped pears, skin on
Begin by adding 1 cup of flour and 1 cup of water to the starter in the bowl and stir until well-combined. Add the salt and enough flour and water (1 cup at a time) to make a thick mass of dough which is difficult to stir. Turn dough out on a floured surface and knead in the remaining flour if needed, until the dough is firm and smooth. Let this dough rise for about an hour, 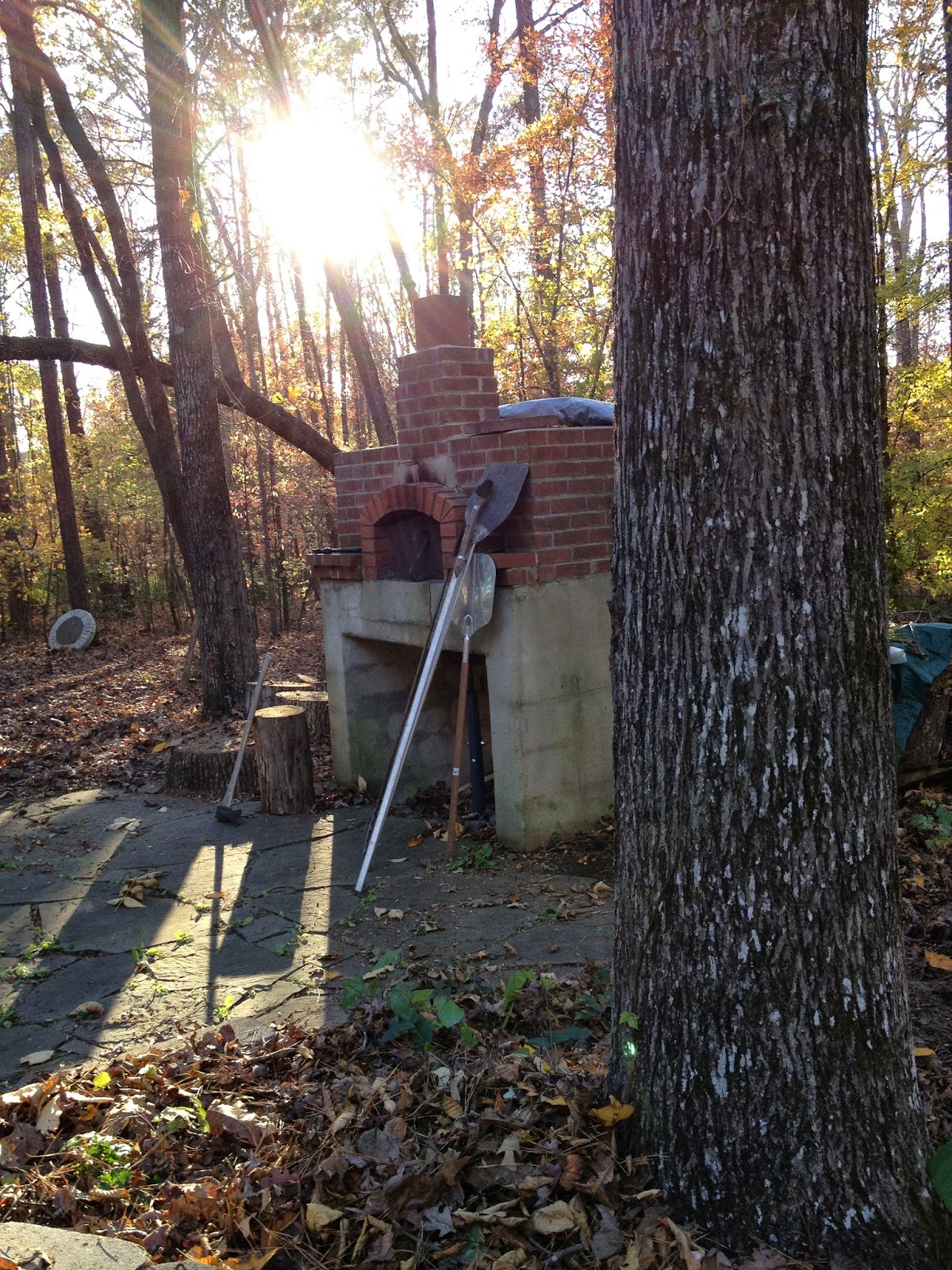 The Wood Oven in a Quiet Moment

taking 2 if you can. Shape the dough into a ball, lightly oil a large bowl and set the dough to rest in the bowl. The dough will not act like a normal yeast bread, it will not rise to a really puffy state.

Prepare the pan for baking: use a large baking sheet with sides, pour on olive oil and using a paper towel or your clean hands spread the oil around so the pan is adequately covered. Punch down the dough and transfer it to the oiled pan. Spread the dough, using your hands, stretching it out into the rectangle of the baking sheet. Let rise another 30 minutes if possible. While waiting preheat the oven to 450 degrees. Top with olive oil, lavender and thyme. Spread the pears you’re your hands over the focaccia and distribute evenly. Sprinkle the coarse sea salt over the top – you may need more than you think, as the pears are sweet. Fun! Bake until firm and a rich caramel color. 20-25 minutes. Cool completely on a wired rack. Cut in squares. 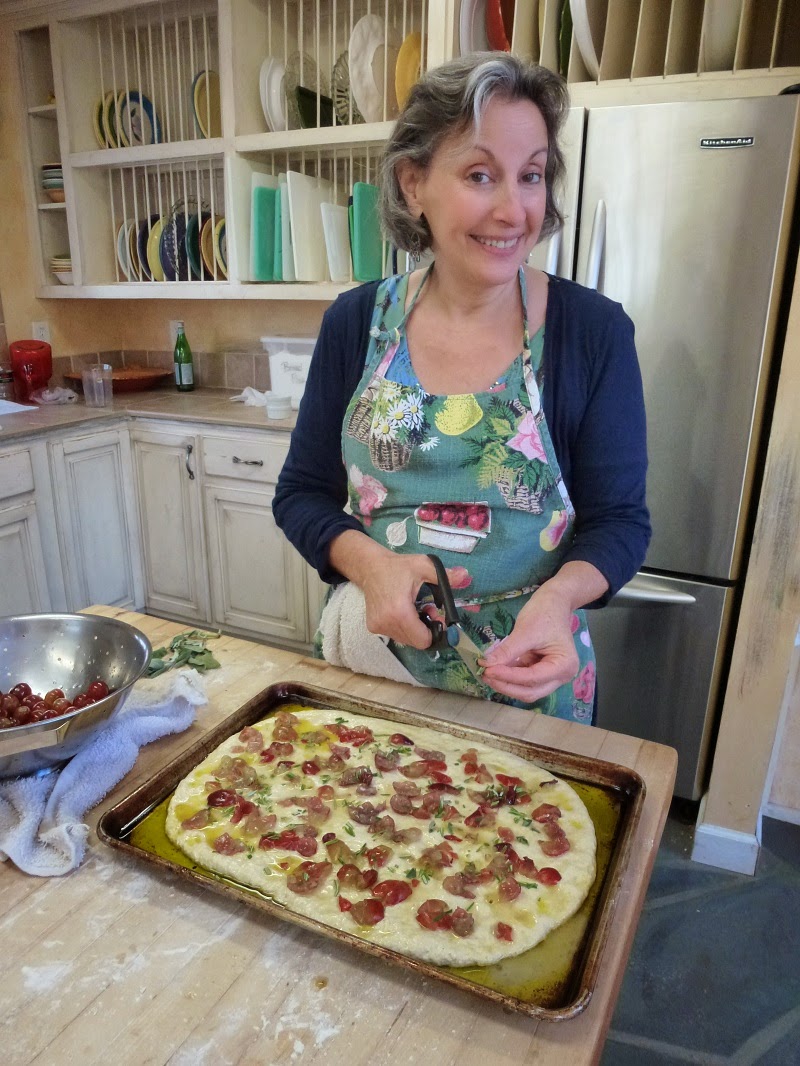