Write With Me: Rosemary Prompts and a Chestnut Cake

Write With Me: Rosemary Prompts and a Chestnut Cake

Write With Me: Rosemary Prompts and a Chestnut Cake
Posted:
February 19, 2013


Last week, Carol Henderson gave each of us a sprig of rosemary for a prompt. Well, I could just sit here and smell rosemary – remembering Provence and Italy. But that would be concocting an excuse not to write something more serious and devoted.
Rosemary seems like lavender in that primal essence and as we would be taking the teens to Joel Durand’s’ Chocolaterie Shop in St Remy – Aileen and I would run our hands through the rosemary bush after we parked the van behind the church or the charcuterie, I don’t remember which, but there were plenty of both in St. Remy. The scent was both invigorating and calming and connected us back to the earth. We would find a bush (easy enough in the wilds of Provence near Les Baux or out near Sophie's secluded House of Honey in the forest. And we needed rosemary’s calming us down influence. And revving up at the same time. Rosemary seemed to do this nicely and completely. It’s a little confusing having 2 prompts or is that just an excuse? Though, as I type this up, I can’t for the life of me, remember what the other prompt was.
Can I try to be funny about how Italian rosemary is different from the Provençale? But so it is and so is either variety that you try to grow here in the red dirt of NC. Our rosemary often gets picked, roots, and all from the garden. We replant it every spring, dig the hole, make sure there are rocks in the bottom for drainage and always feel that rush of purpose and hope that planting the garden brings. Last year Rich took to planting one plant in the garden - one that would be the show plant – and this was a new side to him- another two plants outside the garden that the happy root-plucking kid-chefs wouldn’t find.
Ah, but rosemary, the scent, damn you. Sitting by my purple purse. You remind me of being in the big kitchen of Torre Cona and assisting Chef Paolo with our class. We butterflied the wild boar roast – cinghale - that his father had hunted that morning and brought for us – stuffed it with rosemary needles, rose garlic, and anchovies. Slid it off the wooden cutting board onto the oil-shined potatoes. In a kind of hunting ceremony flourish we carried the big black roasting pan outside the kitchen and into the hot hole in the stone wall of the house. The wood-fired oven. Nearby in the sky – the sun was just kind enough to wink as the last pink edge sunk below the hills of Tuscany.
I never made it with Chef Paolo – but here is another dish that harks back to my earliest explorations of Italy via Elizabeth Romer's book, The Tuscan Year. A savory and slightly sweet cake made with chestnut flour, olive oil, honey, and rosemary laid across the top. This cake is an intrigue. The smoky chestnut flour – the fruity olive oil – the thick honey (chestnut if you can get it) and the almost wand-like christening of the rosemary as it’s laid across the surface of the batter – maybe like a crown. I’ll have the interns make this cake, that cake, what a cake, at their intern try-out, or maybe on intern day coming up soon. A cake like that needs to be made. But it’s a serious cake, an adult cake. Are they ready?
It’s time again, and I have no excuse for not making it. 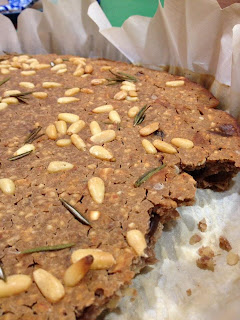 Castagnaccio - Chestnut Flour Cake with Pignolia and Rosemary
I did two things wrong here, but I had to make it when I did. Numero Uno - I did not have raisins so I used craisins. Tuscans, and especially Elizabeth Romer, are crying into their Sangiovese. Mia Dispace! Number two boo-boo. Usually advised to make this in a glass pie plate, which I have in the past, and that is perfectly fine and traditional, and no reason to lose any sleep if you do. However I knew I was taking (some!) of this cake to our writing group meeting and so instead, I lined a 10 inch tart pan with parchment paper so it would be easy to transport. And the other reason? I like the little fluted edge that bakes into the cake using a hand cut parchment circle
for the cake
300 grams of chestnut flour (I find it at Capri Flavors in Morrisville, yes, it's worth the trip)
40 grams of organic sugar
2/3 cup finely ground almonds (walnuts are more traditional, but I didn't have any)
1/2 cup toasted pine nuts
1/2 cup craisins or raisins (soaked in vin santo is even better)
2 cups water
3 tablespoons olive oil
for the top
1/2 cup untoasted pine nuts
three sprigs of rosemary, needles stripped off
Preheat your oven to 400 degrees. Prepare your parchment first or just have your glass pie plate at the ready. No need to flour and oil or any such excess.
With your scale, place a big stainless steel bowl on top and set the tare button to zero. this way you can measure all your grammed ingredients into the bowl at once. Begin, and in the order listed add your ingredients into the bowl. Using  a wooden spoon stir everything vigorously till combined. Scrape this batter into your pan, Scatter the pine nuts and the rosemary on top.
Place in the oven and reduce the temperature to 375. bake for 35 minutes or until set.
Let cool completely.
Break off very small pieces, at a time. Enjoy.